The Cashew is Dead – Long Live the Cashew!

Plasma 5.2 is one of the most forgiving desktops to configure and offers several escape-hatches in the event you literally customise it to death. There is one persistent widget called “the toolbox” (previously known as “the cashew” for the icon it used in Plasma 4, it now uses a hamburger menu) which defaults to the top-right corner of the desktop – and if all else fails this widget is how you fix a terminally customised desktop. When clicked it allows you access to all ‘critical’ operations you may need, including power operations, desktop settings, and the widget toolbox. If you ever find yourself with nothing but a wallpaper the toolbox is your first point of recovery. This is a mainstay from Plasma 4, and it drives tweakers nuts because it’s the one unchanging thing on the desktop. There have been heavy debates on how to hide it, but for the interim it’s here to stay.

The Krunner search (found by hitting alt+F2 or alt+space) is a hidden tool ready to peek out from the top of the screen. From it you can search every aspect of your entire computer; applications, documents, actions (like logging out), bookmarks, and nearly anything else which this versatile tool plugs into are open to search. In Plasma 4 Krunner was fast but highly disorganised, just throwing everything into a sloppy list and calling it a day. This next-generation Krunner uses a much more sophisticated engine which apparently increases the speed further – though it was already too fast for me to detect lag in the searches before. Krunner now categorises results, and this minimal amount of organization goes a long way, letting you quickly zero-in on the result you wanted.

This criminally hard-to-discover tool is a staple for many hardcore KDE users, and has only improved. If you are unsatisfied with any of the result categories, or have no interest in pulling results for things like system commands, the settings button present on the search box presents a simple and understandable configuration tool which allows you to control what is and isn’t searched. I doubt you’ll ever need to turn a plugin off though; this seemingly psychic utility is good at pulling up what you want, and I have yet to be flooded with unwanted results.

Krunner can also be added as a standard widget to the desktop, and is simply named “search”. If you’re a fan of how Apples’ Spotlight is a physical button on a panel, then this is the widget for you. It uses all the same guts as Krunner, but does away with the extra configuration button in favour of the standard settings window. That being said you won’t need to configure this widget, just like it’s parent tool this widget is spooky psychic and crazy fast.

The standard Plasma launcher has seen a modest update in its translation to Plasma 5.2; this version does away with the strange ‘shine’ background that made the previous launcher look displaced. The behaviour is mostly the same in this new version: mousing over the category tabs switches the page, there’s a search function, and the users’ basic information at the top. It will hint that you can type to begin searching, however it does not immediately show the search bar until you start keying in your terms. The search itself is faster and more in-depth than the Kickoff of old – but does limit itself compared to the Kickoff tool, and once you know about the best-kept-secret Krunner the standard launcher search quickly becomes redundant. 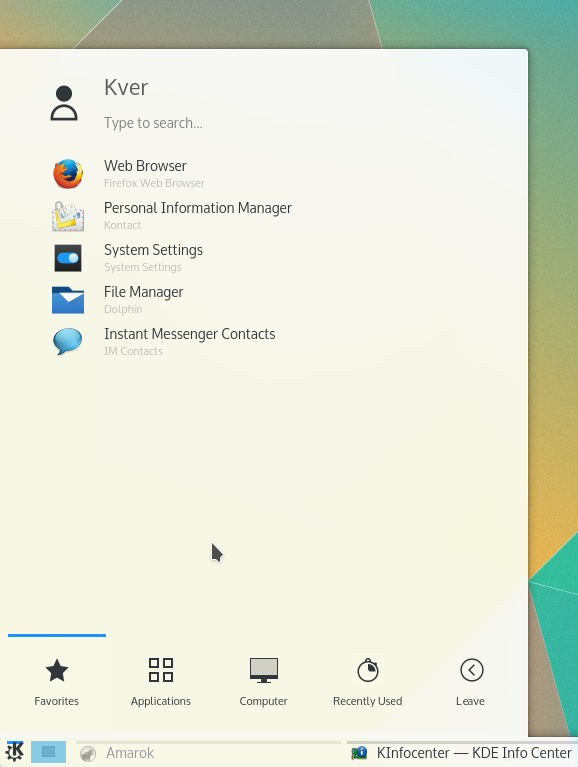 The launcher organises itself with tabs covering topics you would find in the contemporary Windows 7 start menu; user info, search, system info, favourites, applications, common folders, history, and various power/account mechanisms. Because of the large number of bases this widget covers it can be a little bit cumbersome as most of the functions are behind 5 tabs; the idea is to smoothly guide your mouse over the section you want as you’re moving into them, but it does require a momentary pause before those tabs switch, and those tabs are always between the launcher button and the content you want. Generally it’s not an issue as the focus is clearly on getting to your favourite applications, but doing anything other than accessing a favourite application simply feels an iota slower than it needs to be, and it’s the one place where the transitions slow down your work flow.

The system tray has seen one of the most radical designs compared to all other widgets available on Plasma 5.2, both aesthetically, functionally, and behaviourally. Plasma 4 saw the tray put in a ‘wild west’ situation where applications would do whatever they wanted. Clicking some tray items would offer a plasma-based popup, some would offer a contextual popup, and others would just outright launch their parent applications; I’m not even talking about non-KDE applications, I’m talking core Plasma-based widgets.

Plasma 5 saw a complete reinvention of the tray to calm the choppy seas. At first blush it’s a standard tray, and you can hide certain applets you don’t care about as per usual; The tray becomes unique when you click on an item; all core Plasma applets now use a consistent Plasma-based popup, and many of those popups contain a secondary navigation to switch between other available tray items. The secondary navigation can be redundant at times, but it usually contains all available applets including those hidden from the tray itself. 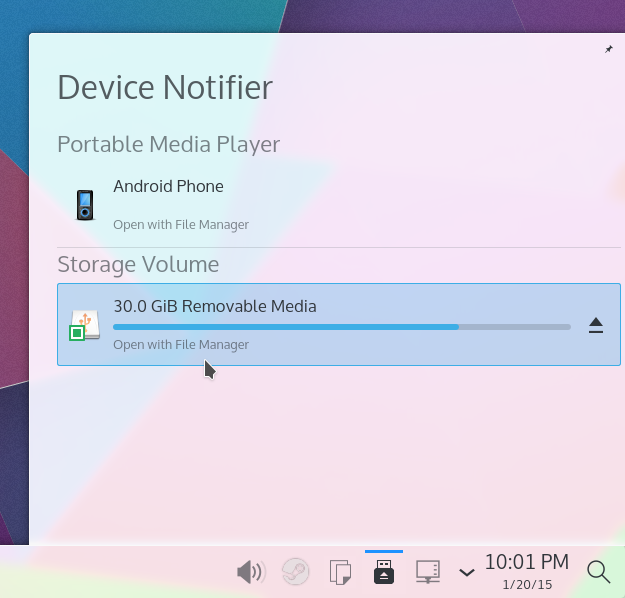 A downside to the cleaner interface is applications which don’t adhere to modern tray protocols – namely applications stuck on xembed – have been officially put to pasture by the update; supporting these applications held back the evolution of the tray and developers have officially left xembed by the wayside in order to further the goal of consistency. The benefits from the new design far outweigh the lack of support for old applications, and Frameworks 5/Plasma 5 are moving towards supporting Wayland which means applications depending on X will eventually be left behind anyway. For other toolkits which don’t traditionally support the preferred Plasma tray API there are patches and helpers which enable the functionality, so for all relevant modern applications support is a non-issue.

Some widgets offered on the Plasma 4 desktop are still absent, including the Weather widget – but more gaps are getting filled in. There are a few widgets which are still quite raw in terms on their configuration options, but across the board there’s a notable improvement in quality with very few exceptions, unlike Plasma 4 where widgets often varied wildly in polish and design.

View all posts by kver

52 thoughts on “Plasma 5.2 – The Quintessential Breakdown”